The Ruger 10/22 is a fully suppressed 0.22 caliber semi auto sniper rifle with a 10 rounds rotary magazine.

In 1987, the Intifada – the Palestinian uprising against the Israeli regime in the Occupied Territories – broke out, and involved mass violent clashes between Israeli security forces and Palestinians protestors. As a result, the Israeli security forces needed a weapon with a more potent firepower then the standard riot control metal covered rubber round, but at the same time less lethal then the standard issue 5.56 mm round of the M16/Galil assault rifles. So the Israeli Defense Force (IDF) searched for a 0.22 caliber accurate rifle that will be used to take out the key protest leaders by shooting them in the legs.

The Ruger 10/22, fitted with a X4 day optic, a full length suppressor and a Harris bipod was selected for this role and was due to be issued to all infantry oriented units, including both special and conventional forces. However, as often happens in the shoestring budget IDF, financial problems prevented the weapon’s mass distribution, and it was mainly issued to Special Forces (SF) units. Moreover, instead of using the rifle as a riot control weapon, as originally intended, the Israeli SF deployed the Ruger 10/22 more as a “Hush Puppy” weapon used to silently and effectively eliminate disturbing dogs prior to operations.

In the recent Israeli-Palestinian clashes began in 2000, the Ruger resumes it’s original role as a less lethal riot control weapon. However, it’s usage in this role was rather controversial this time. After several incidents involving the death of Palestinians by the Ruger fire, the IDF conducted a field experiment in the Ruger at the IDF Sniper School in Mitkan Adam under the supervision of the IDF Judge Advocate General (JAG). The test showed that the Ruger was more lethal then thought especially in upper body injuries. Also, since it’s suppressed and was considered less lethal by the troops, the soldiers were much more likely to use the Ruger loosely then intended.

As a result of this test, the JAG reclassified the Ruger as a lethal weapon. As a lethal weapon, the usage of the Ruger in riot control is much more limited today. In the IDF Center Command it was completely prohibited to use and the IDF South Command it’s deployment was cut down dramatically. 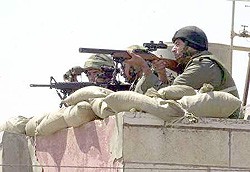 Civilian sniper with the Ruger 10/22 sniper rifle (right), Designated Marksman (middle) and a spotter (left) during the Israeli-Palestinian clashes in the Occupied Territories May 2000. 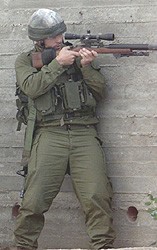 Operator armed with the Ruger 10/22 Suppressed sniper rifle during the Israeli-Palestinian clashes in the Occupied Territories, October 2000. 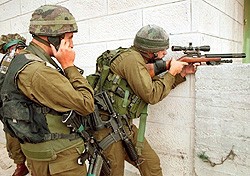 Operator armed with the Ruger 10/22 Suppressed sniper rifle during the Israeli-Palestinian clashes in the Occupied Territories, October 2000. Note that the sniper has a Sig Sauer handgun tacked in his vest.